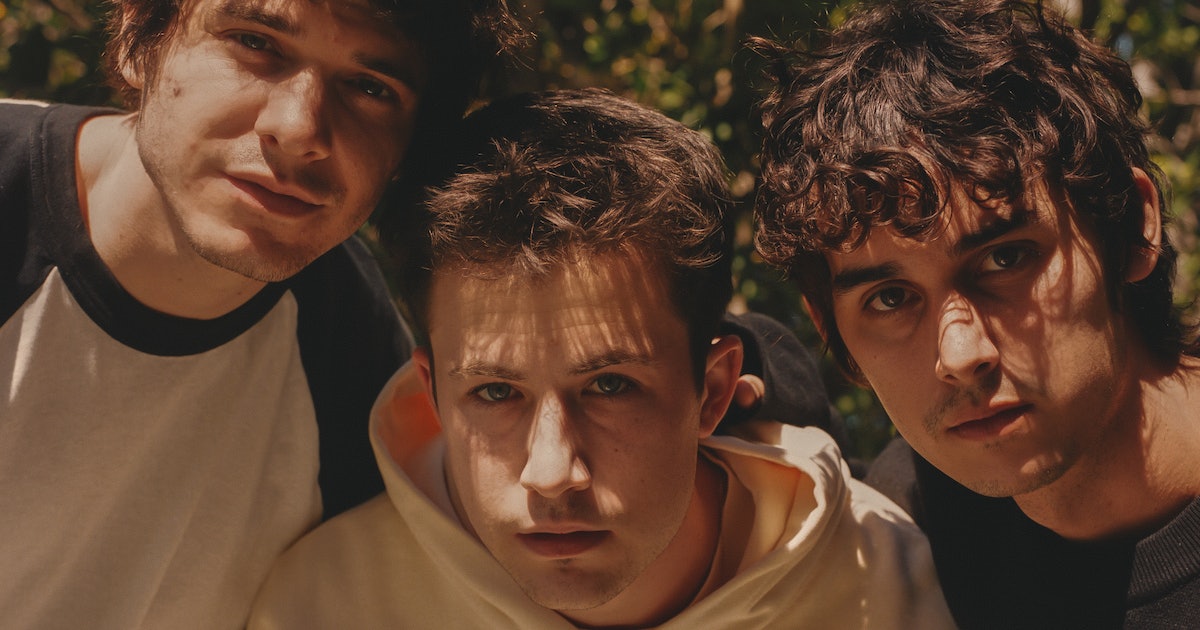 Not all bands formed in college last, let alone become internet and industry sensations, but Wallows is a rare exception. “The beginning of Wallows, for me, is 2017, but theoretically we started playing together in 2009, so 13 years ago,” says singer and guitarist Braeden Lemasters. “I was 13 – I was old enough to start the band [Wallows] is now.”

Over the past decade-plus, Lemasters, vocalist and guitarist Dylan Minnette and drummer Cole Preston have remained engaged, refining their sound and ultimately officially landed on the Wallows name in 2017 after performing without a name for decades. many years. “We had started writing a particular batch of songs where we were like, ‘This is what this next band will be,'” Minnette explains. “During this process is when we landed on Wallows and solidified around, like, ‘Let’s just call ourselves Wallows. Let’s do it.’ There’s just no going back at this point, we were committing for the rest of our lives to Wallows.

Since then, the group has released three EPs, their first album of 2019 Nothing happensand, just in time for their Coachella set, its sequel, Tell me it’s over. Released in mid-March, the album is the latest and greatest of Wallows’ sound: upbeat, lyrical tunes that defy genre. “I don’t think we’ll ever have the same feeling making an album that we did with Nothing happens, because it was the first,” Preston says. “The classic cliché is, ‘You have your whole life to write your first album, which is true. Technically, you could say the first record was written the entire time we were a band. We have took 10 years to do it.

For their second effort, the band sought out producer Ariel Rechtshaid, who Preston says left a big impression on every song. “He makes bands sound really fresh and exciting, and finds this weird way of balancing a band sounding classic and timeless while making it contemporary and cool,” says Minnette, citing his previous work with Haim and Vampire. Weekend as examples. “I feel like it ended up feeling like a similar vibe about it. The album is sort of all over the place, but ends up really coming together in a way that makes sense.

The album comes three years after its predecessor, which received overwhelmingly positive reviews and dismissed a 2x platinum RIAA hit single in their claro with “Are You Bored Yet?” When it comes to feeling the pressure of releasing a follow-up, emotions vary from day to day. “With your second album, there are expectations from people who really like your music,” says Lemasters. “But, on the other hand, we’ve released so much music that I think it’s at least clear to our fans who really love us that we’re putting out what we feel. If you love our music, we’ve written these songs and we love them and we hope you do too. We’re not chasing anything. The only thing we’re looking for is our own inspiration and our own goals. Minnette adds, “Wallows has evolved since the second we released our first song. From day one we intentionally wanted to make it clear that you shouldn’t expect anything from us, the whole thing with this album was not to think too much and just let the album find itself at a certain point.

Preparing for the tour and their performance at Coachella is another story. “Now that, on the other hand, I’m constantly thinking,” Minnette says. “It’s probably the biggest festival slot we’ve ever had, and it’s the first in years. This is the first time Wallows has performed in the wild since our kind of “moment”, for lack of a better word, of “Are You Bored Yet?” propelling us to a place now where we were not before. So we could never see any difference in our popularity, or something translated before our eyes. I think the pressure is, the first [festival] back is Coachella, and we have this really awesome timeslot. It’s a moment, you know?

“We played at Coachella in 2019, and it was the first show on this tour, so the first time we played any of the songs from the first album was on the Coachella stage,” he continues. . “It was the first time we used a lot of new equipment and it was a bad idea. We had a great time, but I would give anything to go back and do that after a few weeks of touring because it would have been so much better. We made it very clear that we weren’t going to play Coachella again if we went onstage cold. Luckily, I think we’re going to be in a much more comfortable position to do it live this time around. We are overall, to put it briefly, very excited.