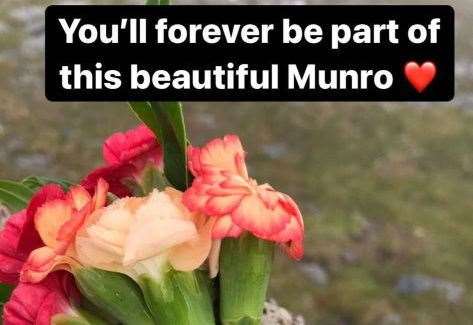 A heartwarming wave of support for a Ross-shire lifeboat crew volunteer helped him navigate his way through nine peaks ahead of a long drive home in a fundraiser that also paid poignant tribute to a loyal supporter.

Daniel Elliot (31), who has been a Team Kyle RNLI crew member for three years, completed his 9 Peaks of Kintail challenge in just over 10 hours, raising over £4,750.

The effort saw him run 40km over nine Munros before cycling 25km back to Kyle Rescue Station the same day.

Daniel, who during the day is a ship’s chef at Kyle Naval Base, started at 7am in Morvich, climbing an ascent of 11,479m along the way.

He was motivated by a desire to help equip the other crew members and the fact that normal fundraising activities – vital to the continuation of the lifesaving service – had been interrupted for more than two years due to the Covid pandemic.

Daniel resumed mountain biking and hill climbing during the lockdown – the latter following his father Bruce while his bike was being repaired.

One of the Munros Daniel knocked down followed the favorite ride of one of the station’s stalwarts, the recently deceased Pat Mucklow.

Touching, Daniel took a small bouquet of flowers and an RNLI badge to leave upstairs in his memory.

After completing the epic mountain challenge, he hopped on his bike and rode back to Kyle’s Rescue Station. He returned to the station just after 5 p.m., where a large crowd gathered to cheer him on at the finish line.

He was delighted to smash his initial target of £3100 – enough to fully outfit and train a crew member.

He said: “I wanted to raise much needed funds for kit and training for new crew members.

“Some of the climbs were difficult, and sometimes I was crawling, however, my father came and joined me on Munro number four, bringing
I really needed water and a boost of morale.

“The weather was good, however later on the heat started to be a problem. I finished the race in nine hours and 15 minutes, then jumped on my bike.

“There was a brisk headwind which was harsh, however, when I reached Kyle the lifeboat crew and families, local pipe band and fire department were all on hand to greet me at the House.

“I would like to thank the Kyle RNLI team, the public and local businesses for their support and generous donations. Without forgetting my family who supported me in my training and my father who finished the second half of the challenge by my side.

Do you want to react to this article ? If yes, click here to submit your thoughts and they may be published in print.