October 15, 2021Written by Catherine A. Rondeau
Leave a Comment 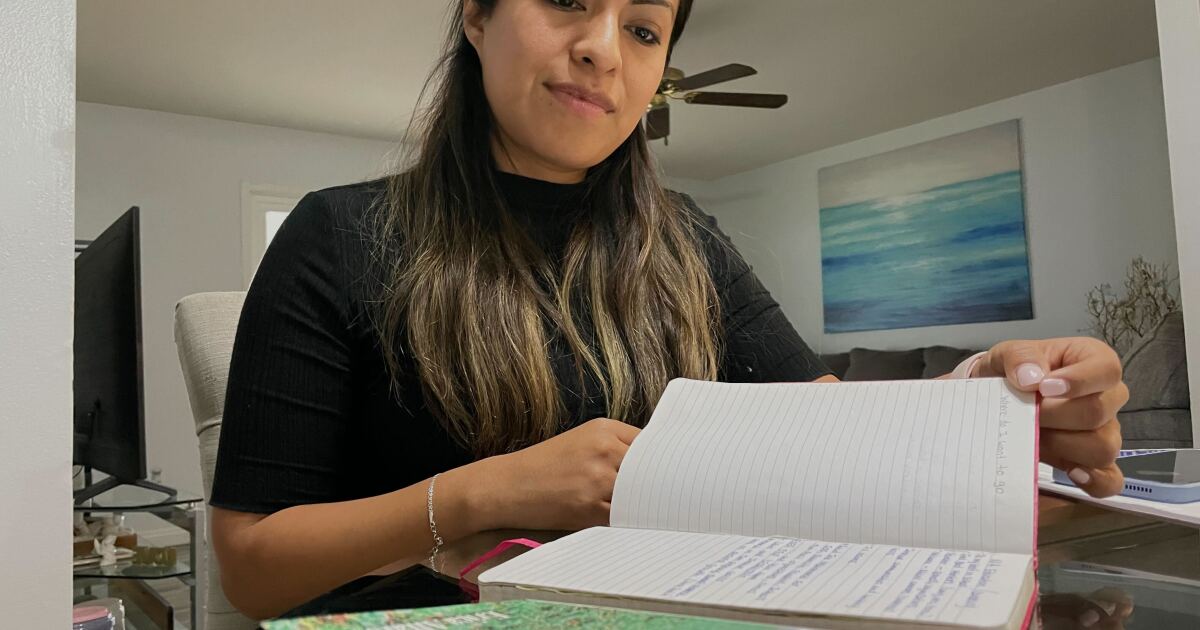 Erica Alfaro wrote the book she wanted to read 15 years ago. At the time, she had become a teenage mother, had been the victim of domestic violence and spoke little English.

But two years ago she graduated from college, which gained international attention. Her SDSU graduation photo has gone viral. Alfaro, in hat and dress, smiling with his parents, both immigrant farm workers, posing in the middle of a strawberry field in Carlsbad.

The image gave a glimpse of its success story. Now Alfaro has detailed every adversity behind her.

“I’ve always loved reading the stories of people who have achieved great things, but yet I have never been able to find a story that really looks like mine,” she said.

In an interview at her Oceanside home last week, Alfaro, 31, showed a page from her diary where, years ago, she included among a long list of goals she wanted a day tell his story in a book. Today, she can cross him off her list.

His autobiography, Coschando Sueños, is now available in Spanish on Amazon, Barnes & Noble and select local bookstores. An English version of “Harvesting Dreams” will be available on October 29th.

A portion of the proceeds will go to the nonprofit Ventura County Vision Young Leaders’ Academy, which offers mentorship to youth.

“Erica’s generosity will help our organization to grow and reach more young people in our community, and her partnership with our organization will show our young members that their circumstances do not define who they are or who they will become,” said Founder and Executive Director Heather Hatchman. “I hope they choose to emulate his achievements and success in life.”

It was important for Alfaro to have a Spanish version, her native language, as she said: “If the Erica of the past had read a similar story at the time, she would have been filled with hope instead of fear” .

She faced fear of the unknown while leaving an abusive relationship, while becoming a single mother at a young age. Her main goal with her book is to motivate other women.

“Maybe you are that person who needs to hear a story that inspires you to dream big,” Alfaro wrote in the book’s preface.

After her photo went viral, she was invited to give a motivational speech at Palomar College in San Marcos. Before the conference, she met a young woman, who did not recognize that she was the speaker.

During their conversation, she told Alfaro that she was there because a teacher told her the story of the girl in the photo which went viral, and after hearing it, she also decided to leaving an abusive relationship so that you can focus on your studies.

“That girl is me,” Alfaro revealed to the woman, unable to hold back her tears.

That’s when Alfaro decided to write the book she had promised herself, but because of her job as an office manager, she just didn’t have the time.

But months later, she lost her job due to the pandemic. Now she had the time she needed.

In her book, she details the sacrifice of her parents, Teresa and Claudio Alfaro, immigrants from Oaxaca, Mexico, who worked from dawn to dusk in the fields to provide her, as well as her two brothers and sisters, a better life.

“They worked all day, with sweat on their foreheads and calluses on their hands,” she wrote. “My mother carried me with her in a rebozo, something traditionally done in Mexican culture. To imagine my mother working and carrying me at the same time is a beautiful symbol for me. It is the metaphorical encounter between my culture, the sacrifice it made for us and its love for me.

His parents always told him and his siblings that if they wanted better opportunities, they had to go to school.

Alfaro became pregnant at the age of 15 from her son, Luis, who is now the same age. Motivated by her son, she left her abusive partner and returned to school at age 17.

She eventually earned separate degrees from MiraCosta College, Cal State San Marcos and a Masters of Education from SDSU.

A few days before graduation from SDSU, she tried on her cap and dress at home. She remembers her mother cried when she saw her in her dress. “She said, ‘Mija, all those hours and sacrifices working in the fields were worth it. ‘ “

This is how the photo was born, which has been seen millions of times. She wanted to thank her parents with a photo that told the story of the hard work.

Today, she said, she gets excited every time she sees pictures of other students honoring parents in the same way.

“It’s a beautiful thing. Sometimes we think that we are alone or that there are no other students like us who are the children of farm workers, but then we realize the sacrifices our parents made so that we could have the opportunities. that they didn’t get, ”she said.

Alfaro is now a motivational speaker and works in human resources for a North County farming company. She recently bought her first home with her husband, José Esquivel.

“I am very proud of her and of all that she has accomplished,” said her mother.

At the end of her book is a copy of a letter sent to her two years ago by then-Senator and now Vice-President Kamala Harris.

At the time, Harris shared Alfaro’s story on a Facebook post. “Erica’s story is the story of America: a story of hope, determination and the search for her American dream.