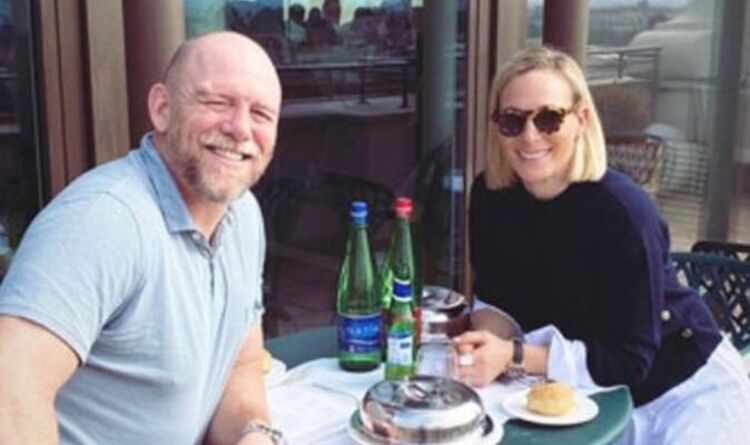 Mike took a break from rugby to have a meal with his wife Zara, who accompanied him on the weekend to Rome where England took on the Italian rugby team in the Six Nations Championship. The former rugby player shared an adorable snap on his Instagram Stories, which showed Mike and Zara sitting outside a restaurant having a relaxing meal.

The beloved pair donned casual outfits as they basked in the unusually warm weather.

Zara and Mike, who tied the knot in 2011, smiled broadly for the camera for the photo, which was shared with the caption, “Bringing Valentine’s Day to The Green Room!”

Mike didn’t elaborate on his trip to Italy, but his photo caption suggests he and Zara may have had a sweet Valentine’s Day in Rome.

Through his podcast The Good, The Bad & The Rugby, the rugby champion follows and comments on the Six Nations tournament with co-hosts James Haskell and Alex Payne.

Mike rarely shares photos of him and Zara together on social media.

In January, he gave a glimpse into his family life by snapping a photo from afar of his wife and baby boy Lucas Philip during a visit to Cotswold Farm Park.

In the photo, Zara can be seen smiling at the camera wrapped in warm clothes and a woolen hat while pushing Lucas’ pram.

Mike captioned the photo, writing, “Lovely evening strolling through @cotswoldfarmpark last night. Worth a visit if you’re nearby!!”

Lucas is the couple’s only boy and will be one year old at the end of March.

His birth was announced by Mike himself during an episode of his podcast, when he also said that his son’s arrival had been very quick and that Zara had to deliver him on the bathroom floor. Tindalls bath.

Mia was spotted at two different events with her mom and dad in late January.

The following day, Mia stepped out in Gloucester to cheer on her dad, as he took part in the Battle of the Balls fundraising football game.

During the more relaxed event, Mia was spotted playing football and hugging her beloved dad while sporting a beautiful face paint on one of her cheeks.

Mia, Lucas and Lena are three of the Queen’s 12 great-grandchildren.

At the end of November, the Tindalls gathered to celebrate Lucas’ christening, which took place in front of the Queen at All Saints Chapel in Windsor.

This ceremony was particularly special for the Royal Family as it took place at the same time as the christening of Princess Eugenie’s son, August Philip Hawke.

Lucas and August are the last two royal babies to be born before Prince Philip’s death.

Since April, the Queen has welcomed two more great-granddaughters.

Meghan Markle and Prince Harry welcomed their second child Lilibet ‘Lili’ Diana in June at a hospital in Santa Barbara.

On the other hand, Princess Beatrice and Edoardo Mapelli Mozzi became parents to Sienna Elizabeth in mid-September.