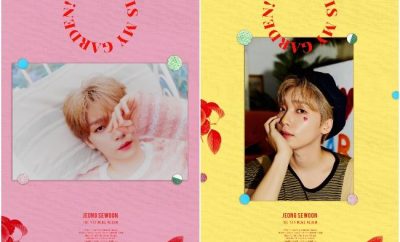 Jeong Sewoon proves he’s the flower in everyone’s garden in his fairytale and whimsical concept photos.

Holding his comeback on May 11, Jeong Sewoon is the personification of spring in stunning images for his upcoming album. Starship Entertainment has released the second batch of prints for their 5th mini album, “Where is My Garden!” April 30.

Contrary to the first batch of images with a playful and retro atmosphere. Now, Jeong Sewoon is giving us a glimpse of his celestial garden with his warm aura full of sweet charm.

In this stunning set of photos, one features the singer lying on a bed outside and covering one eye. Her glowing skin and deep eyes are sure to have fans’ hearts racing with this snapshot.

In another photo, fans see her entire bed in a refreshing mood. He lies on the sheets like an angel with flowers and greenery among the scene.

On the other hand, his third and final set of concept photos depicts a celebration. He poses with a black beret and a charming heart on his cheek. In another photo, he’s wearing a party hat and holding a cake as if giving it to his Haengwoons. Scattered around it, streamers and balloons are ready for a fun and unforgettable party.

Through this album, Jeong Sewoon sings of the hope of youth and will show his development as a singer-songwriter. He has been loved by countless fans for his outstanding writing, composing, and producing skills. He hopes to comfort listeners with beautiful harmonies of relaxation, comfort, healing and youthfulness.

Following the release of his concept photos, Haengwoons are in for more surprises with six album videos dropping May 2-7. On May 8, the music video teaser will surely excite fans even more. Giving a preview of what the album looks like, the highlight medley will be released on May 10.

Finally, Jeong Sewoon will return with his 5th mini-album, “Where is My Garden!” Wednesday, May 11. It will be available on various music sites at 6 p.m. KST.

How does this story make you feel?