October 28, 2022Written by Catherine A. Rondeau 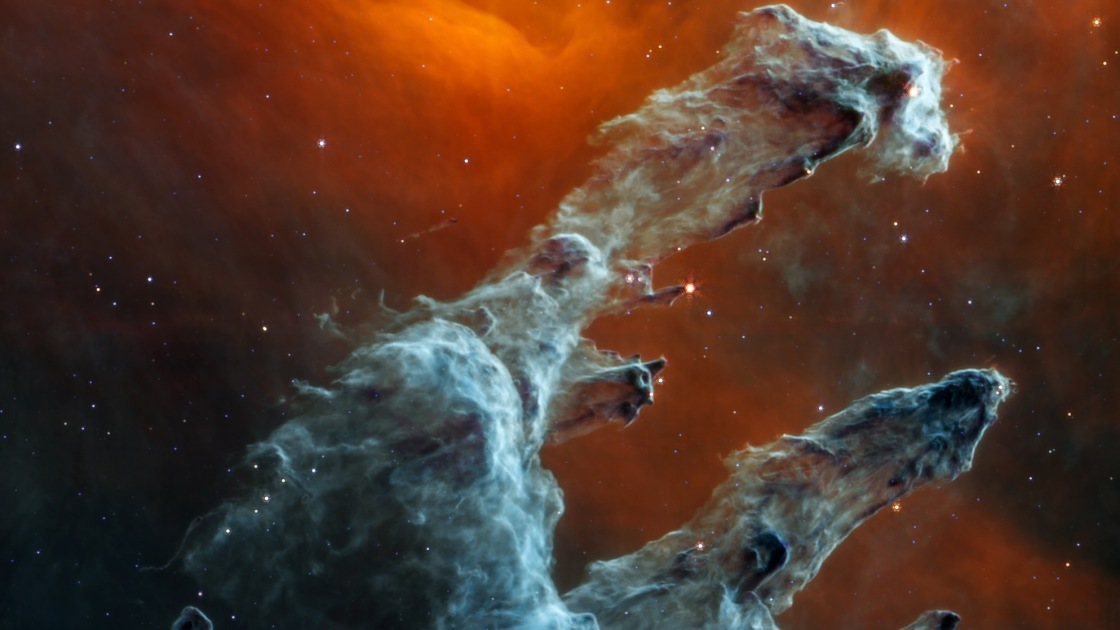 Many have seen the iconic NASA image of the “Pillars of Creation”(Opens in a new window)“, a giant cloud of dust light years away that gives birth to new stars. But not like this.

On Friday, NASA released a new image of the Pillars of Creation, this time taken with the James Webb Space Telescope. And the resulting picture is a bit scary.

The picture(Opens in a new window) shows the Pillars of Creation – which reside in the Eagle Nebula – rising like a ghostly hand. The golden and brown hues found in the original image, taken by the Hubble Space Telescope in 1995, have been replaced with icy blues that look like they belong in a haunted crypt.

NASA: “Thousands of stars that exist in this region seem to be disappearing, as the stars generally don’t emit much mid-infrared light, and seemingly endless layers of gas and dust become the centerpiece” (NASA)

The reason the image looks so different is that the James Webb Telescope used its mid-infrared sensors to record the photo. These mid-infrared sensors can capture light that human eyes cannot see and are particularly adept at observing cosmic gases in detail. In contrast, the original Hubble Pillars of Creation photo was taken(Opens in a new window) on visible light, or the segment of light that our eyes can see.

“Interstellar dust blankets the scene,” NASA said.(Opens in a new window) in the ad. “And while mid-infrared light specializes in detailing where the dust is, stars aren’t bright enough at those wavelengths to show up. Instead, these ominous pillars of lead-hued gas and dust gleam around their edges, hinting at the activity within.

The few stars that appear “are the crimson orbs towards the fringes of the pillars,” NASA added. These young stars are still shrouded in dust, allowing the telescope’s mid-infrared sensors to detect them.

“The densest areas of dust are the darkest shades of gray,” the space agency added. “The upward red region, which forms a strange V, like an owl with outstretched wings, is where the dust is diffused and cooler.”

Recommended by our editors

The Pillars of Creation, but taken with the James Webb Telescope’s near-infrared sensor. (NASA)

The James Webb Telescope also broke(Opens in a new window) an image of the Pillars of Creation using its near-infrared sensor, which gives the dust clouds a whole new look. The near infrared camera is able to capture hundreds of young stars forming around cosmic gas.

Although the Pillars of Creation may look like a hand, NASA says(Opens in a new window) the dust cloud spans about four to five light-years, making it much larger than our entire solar system. Meanwhile, the entirety of the Eagle Nebula spans about 70 by 55 light-years. The nebula is about 7,000 light-years from Earth.

Register for What’s up now to get our top stories delivered to your inbox every morning.

This newsletter may contain advertisements, offers or affiliate links. Signing up for a newsletter indicates your consent to our Terms of Service and Privacy Policy. You can unsubscribe from newsletters at any time.