In Ukraine’s decimated towns, residents struggle to cover the cost of repairing their homes

November 1, 2022Written by Catherine A. Rondeau 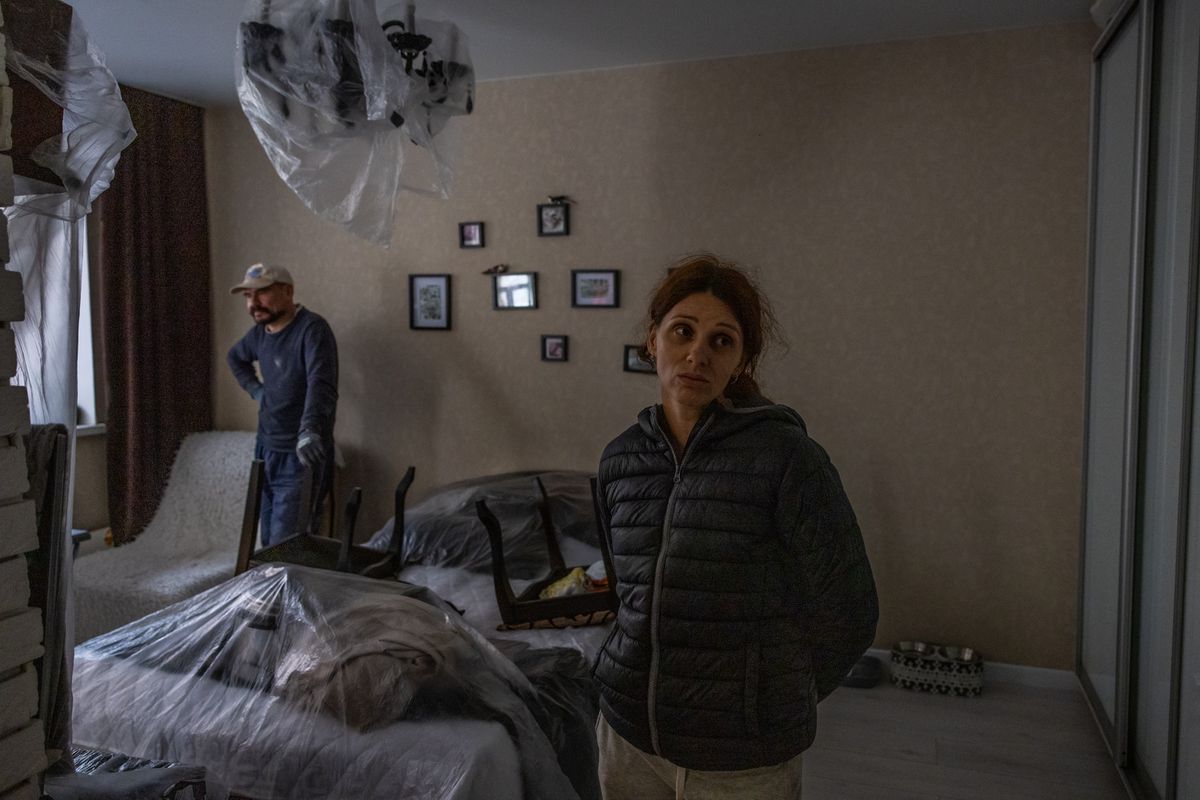 The small calendar Oksana Yemelianova keeps on the fridge of her one-room apartment in Irpin, on the outskirts of Kyiv, is frozen in time.

Ms Yemelianova used to mark the days with a sliding square, but she hasn’t moved it since February 24, the day Russia launched the invasion of Ukraine and her soldiers quickly moved to Irpin. Ms Yemelianova was evacuated in March as the fighting intensified, but she and her husband, Ivan, returned a month later after the Russians were driven from the town. They immediately faced a new ordeal.

Their five-story building was barely habitable. Much of the roof had been destroyed and many walls showed signs of shrapnel damage. Tank tracks still lined the driveway. The ground floor flat which Ms Yemelianova shares with her husband had been inhabited by soldiers and although nothing had been stolen, there were still boot prints on the mattress.

Now she and the other residents of the building had a dilemma: who would pay for the repairs?

With minimal financial support from the government, Ms Yemelianova and the others were left to fend for themselves. They each contributed what they could and raised 2.2 million hryvnia, or $81,000, to replace the windows and repair part of the exterior. But they still need about 6 million hryvnia to rebuild the roof. With nowhere to go, they created a website and asked for donations.

The building at 19 Kovalskyi Lane is just one of thousands across Ukraine that are in desperate need of repairs or, in many cases, outright reconstruction.

The current cost of rebuilding the country’s infrastructure is estimated at nearly $350 billion, according to the World Bank, and that figure will rise as the war continues. Ukrainian government finances are dire and while Canada and other countries have offered to help, for now most of the burden falls on local residents, many of whom have already experienced unspeakable horror. And now they have to rebuild largely on their own.

At Kovalskyi Lane, Ms. Yemelianova and 133 other families in the building were asked to contribute US$1,000 each towards repairs to the building. Less than half could afford to pay and only a handful of families returned. The Yemelyanovs only managed to raise $500. They also had to cover the cost of repairing their own apartment and buying a new sink, toilet and some furniture.

None of this has been easy given that Ms Yemelianova cannot find a job and her husband earns a small income as a mechanic. “We can’t afford all these repairs,” Ms Yemelianova, 41, said as she surveyed her studio.

The couple had previously been driven out of Lugansk in eastern Ukraine in 2015 after the outbreak of war with Russian-backed rebels. Now they had lost almost everything again.

Across town, Viktoriia Deineka, 62, and her 72-year-old husband, Petro, have lived in their spacious four-bedroom home for decades. Mr. Deineka grew up here and took over the property when his parents died. They built a small guest house in the garden and added a sauna.

When the Russians invaded, Mrs. Deineka headed for central Ukraine, but her husband refused to leave. He nearly died when a missile hit the guest house. The bomb flattened the building and shrapnel ripped through the main house, leaving dozens of holes in the roof and cracks in the walls.

The couple, who depend on pensions for their income, have registered with the city for some kind of support. But they haven’t heard anything so far, and as winter approached, Mr. Deineka took charge of the repairs himself. He has installed new windows and repaired most of the roof, but the covering is only temporary and the couple are worried about whether the house will be warm enough. Ms Deineka waved her hand when asked how much it all cost. “I can’t even calculate it,” she said. “And the costs keep going up.”

Valentyn Bronetko has seen almost no change to the exterior of his building at 17 Yablunska Street in the nearby town of Bucha, despite promises from city officials that repairs would be carried out.

It was one of the most notorious streets during the Russian occupation. At least 20 people have died here and the nine-story building bears deep scars from the fierce battle to reclaim the suburb. Several apartments on the top three floors were blown out and many windows in the stairwells remain broken.

The city replaced dozens of windows in apartments, but other than that, Mr Bronetko said the building looked the same as when he returned with his wife and two children in May after the end of the occupation. “It’s a constant reminder of what happened,” he said, looking at the giant holes in the top three floors where the apartments once stood. “There is a sense of death here.”

There is no financial support to repair individual apartments, and so Mr. Bronetko paid 100,000 hryvnia to repair his walls and ceiling, which were lined with shrapnel holes. He estimated that less than a third of the 146 flats are now occupied and many more residents are unlikely to return given the state of the structure.

On the fourth floor, Oleksandr Melnyk has lived here since the block opened in 1983. He knew the people who lived in the bombed-out apartments. Most of them had been evacuated before the rocket hit, he added, but one boy died.

Mr. Melnyk remained in Bucha throughout the occupation and spent most of his time hiding in the school basement across the parking lot, dodging bombs and Russians.

At first he found it almost impossible to live here after the occupation. There was no heating, electricity or running water. The water is back and the electricity comes and goes. Remarkably, his apartment was largely intact and he settled back in despite the soot still coating the staircase and the lingering smell of burnt debris from the units above. “You get used to it,” he said with a shrug.