Has the obsession with celebrity kids moved into dangerous territory? 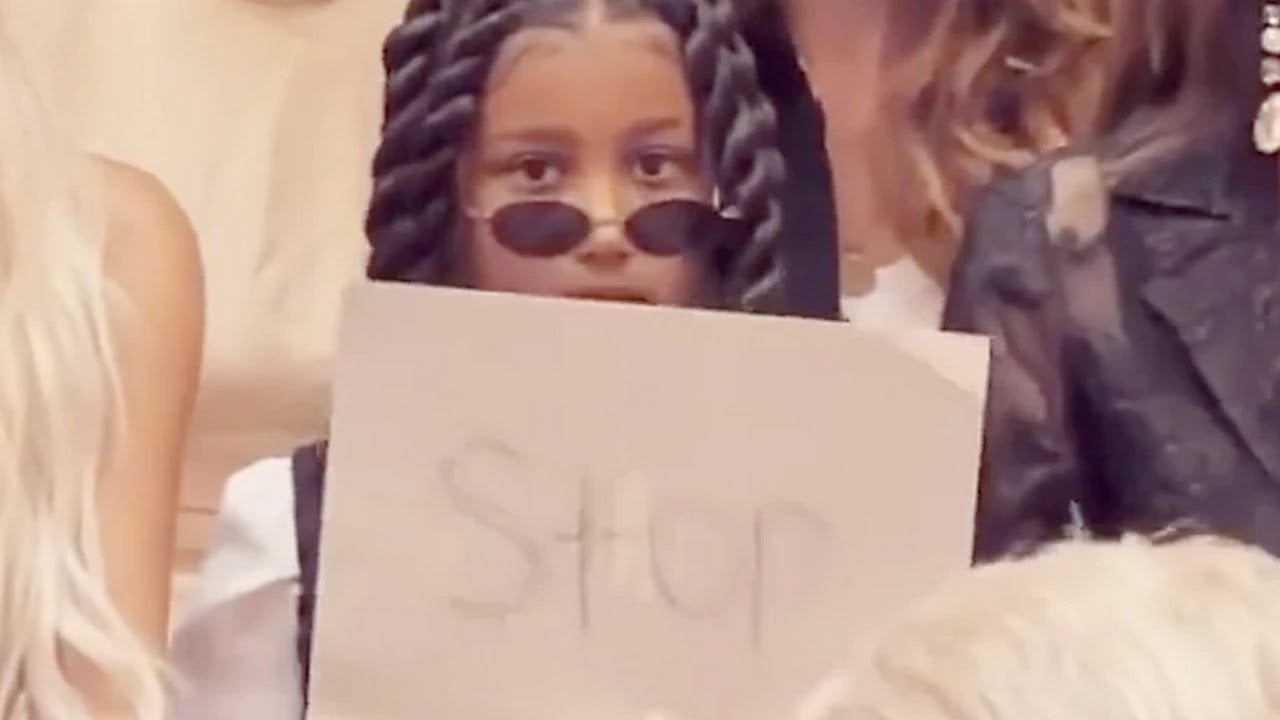 I’m sure you’ve all seen the photos of Kim Kardashian and her eldest child, North West, strolling around Paris by now. Originally there for work – Kim took part in the Balenciaga haute couture show last week – the reality TV star turned business mogul decided to extend her trip and stayed in Paris for a few extra days alongside her daughter and some friends.

Showing North – now nine – around the City of Love, Kim took her brood to some of her favorite hotspots. There were photos of them at the Louvre, entwined in fabulous Parisian hotel rooms and of course, sitting front row at Jean Paul Gaultier’s AW22 show (next to Anna Wintour, no less).

Obviously, being a Kardashian has its perks… but it has its downsides too, and the duo’s journey has been plagued with paparazzi attention along the way. Clearly tired from the relentless photo-taking, North decided to take matters into her own hands at one point – using her invitation to create a handmade stop sign which she then held up and waved at the crowd of waiting cameramen.

For anyone who knows North knows how funny she finds this video! North I guess was fed up with people taking pictures of her so she wrote on her STOP invitation and held it and wanted them to just focus on the show…???? pic.twitter.com/29F26ooy8A

Sharing a clip of the now-viral moment on Twitter, Kim described it as a fun act of rebellion from her very opinionated youngster. “Anyone who knows North knows how funny she finds this video! North, I guess, was fed up with people taking pictures of her, so she wrote on her STOP invitation and held it and wanted them to just focus on the show,” Kim explained. Many people were concerned about Kim’s blasé attitude towards the whole thing and the mother-of-four has since come under fire for calling the incident harmless.

Growing up as Kardashian means living your life in front of the camera. Kendall and Kylie fell victim to it from an early age, and now the next generation of Kar-Jenners have found themselves at the mercy of the spotlight, but it’s not necessarily a life they chose for themselves. . With North now old enough to speak out, the fight between paparazzi and celebrities rages on.

The moral debate over whether famous kids should be considered “fair game” simply because of who their parents were has long been a matter of contention. This time last year, Blake Lively and Gigi Hadid spoke out about the importance of protecting minors in the media.

Wanting her child to experience the beauty of the world, without worrying about the looming threat of hidden cameramen ready to pounce, Hadid took to Instagram to ask the public for some consideration.

Like Kim, Gigi also has first-hand experience of what growing up in the spotlight is really like and while it was a life she ultimately chose for herself, it’s a decision she wants her. own daughter takes a day too.

“It would mean the world to us, as we take our daughter to see and explore NYC and the world, if you could please PLEASE blur her face in the pictures, if and when her photo is taken “, Hadid wrote on Instagram at the time, later admitting that the “dramatic paparazzi frenzies” are even “overwhelming and disorienting” for her, as an adult.

“I know laws change from state to state, and I’ve seen paparazzi photos of kids in New York with their faces blurred – but after asking around I think it comes down to the integrity of the photographer, posts or fan shares of the images,” she said, adding, “I hope this can continue the conversation to protect minors in the media, even if they come from a public family.

Lively reiterated much the same message, detailing a past exchange between her and the paparazzi; one she described as “f*cking scary”. Commenting under an article that the Daily Mail Australia posted on social media, Blake demanded the publication remove photos of her children – accusing them of editing the photo montage together in a way that made it look like she was happy to pose for the camera and call for their “deception”. » tactic.

“The real story is this: My children were stalked by men all day. Jumping. And then hiding. A stranger on the street had words with them because it was so upsetting for her to see.

“When I was trying to calmly approach the photographer you hired to take these photos to talk to him, he would run away. And jump again to the next block.

Asking if background checks are done on any of the photographers hired “to stalk children,” Blake then asked if the team had any morals. “You just don’t care about the safety of children? The photographers talking to me, I was able to accept a smile and a wave and let them take my picture for my kids if they left my kids alone. Because it was scary… Please stop paying grown men to hide and hunt children. There are a lot of photos you could have posted without the kids. Please delete. Let’s go. Be with the times,” she concluded.

Back in 2020, the Duchess of Sussex Meghan Markle sued a paparazzi agency in photos taken of her and her son Archie in a park on Vancouver Island.

According to the British agency Splash, the photographs were “an important matter of public interest” following the Duke and Duchess’s decision to step down as senior royals. Markle’s legal team argued she had a ‘reasonable expectation of privacy’ citing JK Rowling’s 2008 court ruling (over photos taken of her son) which protects children of celebrities from photos without the permission of their parents, unless their parents have exposed their children to advertising.

Markle won the lawsuit against Splash, releasing a statement that read, “This settlement is a clear signal that illegal, invasive and intrusive behavior by paparazzi will not be tolerated.”

Earlier this year, Meghan and Prince Harry filed a lawsuit against news agency X17 for flying camera drones over their Los Angeles home.

Several other celebrities added their two cents to the conversation – including game of thrones starring Sophie Turner. “I’m sickened, I’m disgusted and I respectfully ask everyone to stop following us and to stop trying to take pictures of our daughter and especially print them,” she previously said in a statement. Instagram story.

Almost a decade ago, actors Halle Berry and Jennifer Garner testified before California state lawmakers in support of an “anti-paparazzi” bill to impose tough penalties on photographers who harass children of celebrities.

“My daughter doesn’t want to go to school because she knows ‘men’ are watching her,” Berry, who was pregnant with her son, told the court at the time. “If this passes, the quality of my life and that of my children will be radically changed.”

The bill was finally signed into law in California in September 2013, with penalties ranging from a year in prison to tens of thousands of dollars in fines. Jennifer Garner, who has three children with Ben Affleck and is one of the most outspoken stars on the subject, told SiriusXM the bill being passed is “life changing” because instead of 20 photographers according to his family, they only have one left. or two.

Kristen Bell and Dax Shepard continued to lead the charge, pressuring print, online and TV media to adopt a ‘no kids’ photo policy, urging their celebrity friends to ignore carpet posts red or to refuse interviews if the editors did not agree.

People Magazine was among those who instituted the policy, with then-editor Jess Cagle noting: ‘It was the human thing to do – those kids didn’t ask to be famous. We did not want to support an industry where children are terrorized or pursued. As he said, if fewer publications were willing to buy photos of children, it reduced demand and lowered the motivation of photographers.

However, nearly a decade later, celebrities are still having the same conversations — even in 2022, a time far more sensitive to sensibilities, privacy, and the impact such authoritarian media attention can have on people. a person and their children.

Dale Cohen, director of the Documentary Film Legal Clinic at the University of California, Los Angeles School of Law, thinks this will always be a controversial topic…no matter how technology and paparazzi perceptions change.

“In all honesty, I think it’s a subject that goes in and out of public view,” Cohen said. The Washington Post. “I guess every generation of celebrity parents learns how to deal with the costs of their extremely effective media use and popularity, and what the downsides are.”

The issue has only become more complicated over the years as social media blurs the lines between what is acceptable and what is not. Fans feel more and more entitled to know the intimate details of famous people’s lives…and the tabloids/paparazzi are only too happy to meet this demand for content. But at what cost ? And shouldn’t North West asking them to stop be enough to tell us that the obsession with celebrity kids has gone too far?