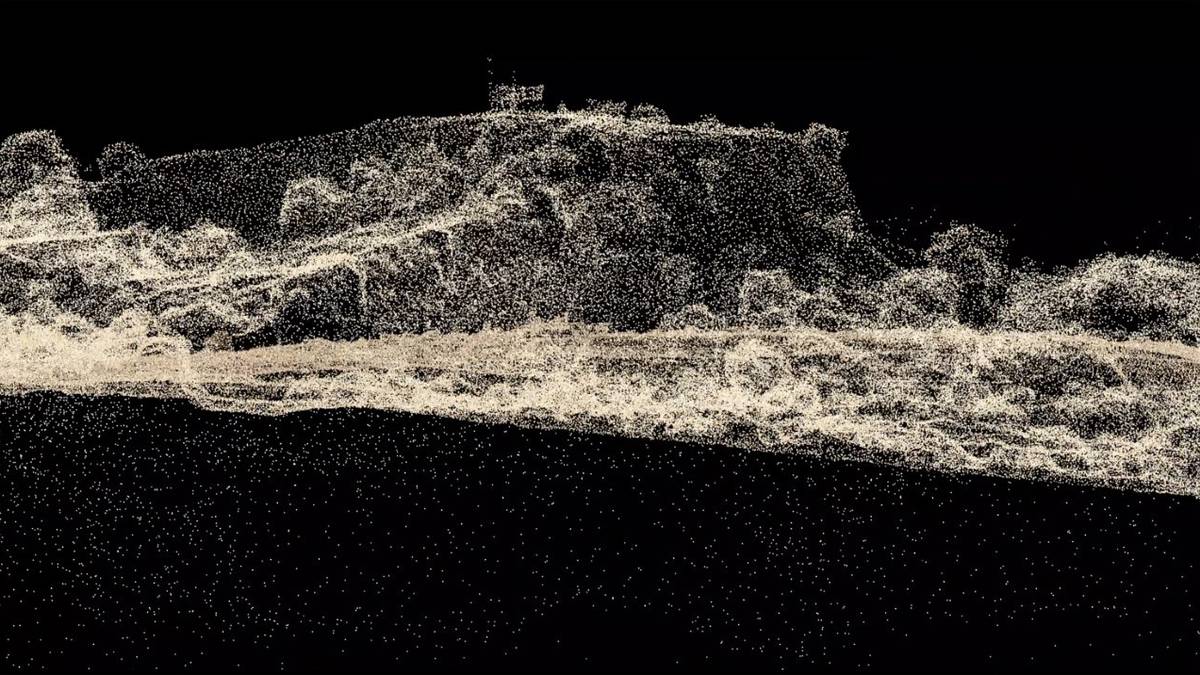 It was great to celebrate with him and the whole community involved in the creation of his new work.

In the moving image work, drone footage and three-dimensional scans provide views of Otatara Pā, Te Awarua o Porirua, Pākowhai, Roto a Tara, and Ōmārunui. Each is wāhi tapu and extremely important to the iwi who lived there and each is also a place from which the whānau were brutally alienated by the Pākehā settlement.

The camera takes us to these lands, as if we were scanning like the kāhu or the falcon.

Sometimes the relief resembles an earthly veil, suspended in a powerful black space that seems to recall in time the first light of dawn – te whaiao. Other times, road bridges, overturned cars or monuments populate the landscape and seem to us to be located in the present. Here, all the stories seem to spiral into the present.

It is the job of MTG Hawke’s Bay to illuminate the local stories of the history of this region. Exploring these stories through creative media such as photography offers visitors the opportunity to engage and learn in different ways.

MTG is also committed to supporting the practice of Ngāti Kahungunu artists, giving them visibility through the exhibition of their work.

The history of Hawke’s Bay in the 19th century remains defining for its inhabitants today. In the 50 years since the settlement of Ahuriri, Napier, the demand for land has seen settlers employ increasingly brutal and unjust methods of acquiring land from Maori landowners.

While in recent times the Waitangi Tribunal has widely acknowledged these injustices, it is safe to say that many of us in the community remain unaware of this history.

New Zealand historians have criticized the Native Land Court and the Native Lands Acts for a number of reasons, primarily because land was easily sold to private buyers, leading to very rapid loss of Māori land and consequent impoverishment.

Flatt’s project began as an investigation into the history of land sales in Hawke’s Bay. After reading the Hawke’s Bay Native Lands Alienation Commission report published in 1873, Flatt realized that it was crucial that he learn the known stories of local Maori.

In his research for the project, Flatt had the chance to hear the stories of this place firsthand.

The oral histories underlying Flatt’s works were told to him by descendants of Hawke’s Bay changemakers in the 19th century, such as Tareha and Te Hapuku. Chad and Taape Tareha, Teiti Hapuku, Margie McGuire, Aki Piper, and Patrick Parsons have been incredibly generous in sharing their historical knowledge, stories that simply aren’t published or known to the public.

In Te ahua, te wa, te atea, the artist does not attempt to tell these stories, nor does Flatt express a point of view. There are no words or text in the work, being only sound and moving images. Rather, it is a response, a visual and felt response, to this place – the experience of being in this whenua and learning something from the stories contained in the land.

It is timely to support Flatt with a commission of this magnitude and in the Kahungunu region.

We hope you can join us Saturday at 11am to hear the artist discuss the project with Dowse director Karl Chitham, MTG’s Te Hira Henderson and myself at MTG’s Century Theatre.

Toni MacKinnon is an art curator at MTG