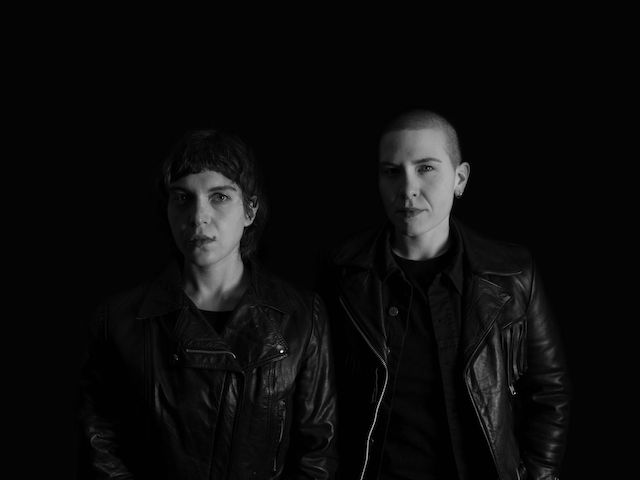 Bonnie Trash is the drone-rock project of the Canadian-Italian twin sisters Emmalia and Sarafina Bortolon-Vettor. Today they announced the details of their debut album, ‘Malocchio’to be published on October 28 Going through hand drawn draculaand shared a new single “As you saw”

‘Malocchio’ unfolds a real-life horror story based on the stories told to them by their Italian grandmother. Over heavy, hypnotic riffs, pounding drums and chilling soundscapes, the lyrics draw the listener into the meaning of the “evil eye,” one spell of mischief over another.

Speaking on today’s new single – The Shadow and the Foreboding “As you saw” – the comment of the group: “The music video unfolds like sci-fi involving another dimension/timeline. Using the same idea of ​​the malocchio that haunted our nonna decades ago, what does it look like when evoked by generations later in the future, and can this generational haunting end once and for all?We see two siblings face the malocchio head-on, only for him to follow once more.The curse has become a part of them. Don’t be afraid.

Have You Seen Her is also about the tragic loss of a loved one, the desire to be with them and wonder where they ended up – above the clouds? Underground ? A new dimension (for us)? Death is the only thing we know to be true in this world. Precious memories here are what we keep. When our loves are taken from us by what can be a curse, it’s only natural that we want to find a way to reverse it and reunite with them in harmony.

To listen “As you saw”: https://www.youtube.com/watch?v=mSKf-8aXNoM
Other Bonnie Trash links: https://linktr.ee/BonnieTrash

Sonically, ‘Malocchio’ connects the threads between metal, post-punk, shoegaze and gothic rock, with Emalia’s guitar work reminiscent of Black Sabbath, Godspeed! You Black Emperor, Joy Division and My Bloody Valentine. Singer/drummer/lyricist Sarafina’s voice comes out of the mix with a commanding presence, evoking notes of PJ Harvey or Siouxsie & the Banshees.

Combined with these influences, the duo’s unique approach to their lyrical content truly puts them in a school of their own. Inspired by communication theory, social commentary, horror, and ancient folklore, the sisters approach their writing as a conceptual research project into their own family heritage. As second-generation Italian-Canadians, the Bortolon-Vettors became fascinated by the stories told by their Nonna and the connections between Treviso in northern Italy and their hometown of Guelph, Ontario.

The album begins with the voice of Nonna Maria, their 93-year-old maternal grandmother whose life story inspired the creation of ‘Malochio’. The cracking recording of an interview with Maria, accompanied by an apocalyptic drone, sets the tone for the doom to come. After emigrating to Canada in the late 1950s and starting a family, Maria must return to Italy after the death of her stepfather. Maria’s family is cursed and haunted by the untimely death of those who would have received the evil eye long ago. Maria experiences life-threatening omens and supernatural experiences, which means she must return to Canada before the curse takes her family.

This chilling work builds on the reputation for thought-provoking horror rock established with their 2017 debut EP, ‘Ezzelini is dead’. This six-song collection was based on the myth of Ezzelino III da Romano, a cruel medieval tyrant from their family’s hometown of San Zenone degli Ezzelini – who was reputed to be a cannibal.

‘Malocchio’ was co-produced by the band and Josh Korody (Vallens, Fucked Up, Nailbiter, Breeze, Beliefs) at his studio, Candle Recording in Toronto. COVID has slowed the planned recording schedule, but the extra time has given the duo a chance to cut the sound down to its fundamentals and deepen their aesthetic of “apocalyptic emotional doom,” as Korody has anchored it. In the fall of 2020, Korody sent three mixes to his label boss, James Mejia, which piqued his interest, and with ‘Malocchio’Bonnie Trash joins the roster of famous Canadian independent label, Hand Drawn Dracula.