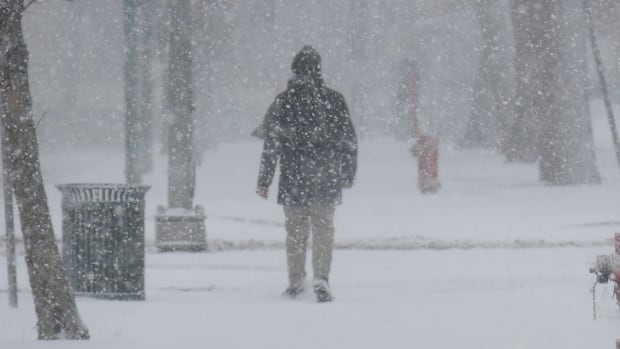 After a brief taste of spring, Manitobans woke up Wednesday morning to fresh snow cover, strong winds and near-whiteout conditions – and that will continue for the next two days.

The blizzard that forecasters warned crossed the Canada-US border Tuesday evening into southern Manitoba in the early hours of Wednesday morning.

By mid-afternoon, Winnipeg had seen about 16 centimeters of snow, while other parts of the province had seen up to 30 centimeters.

Waves of sometimes heavy precipitation will continue to hit the province, accompanied by northeasterly winds gusting at times up to 70 km/h. More snow is also on the way through Thursday night.

Resilient Manitobans are ready to make the most of an unwelcome storm, whether they’re commuting to work, walking their dogs or shoveling their driveways.

Schools across the province are closed to keep people off dangerous roads in whiteout conditions.

In Winnipeg, playgrounds remained empty after division chiefs said schools and city administrative offices would be closed Wednesday and Thursday, and staff are encouraged to stay home.

This is the first time in 25 years that weather has forced the closure of all schools in the Winnipeg metropolitan area.

Siblings Samuel and Erin Pyles-Mindell and their friends Pete and Charley Buchanan weren’t happy about it.

None wanted to stay home from school or daycare, but worked on building a huge snowman to make up for it.

“It’s boring but it’s fine,” said Charley, 9, as he worked on a large snowball for the snowman’s base.

Elsewhere in southern Manitoba, Brandon is experiencing poor visibility due to snow.

“I thought winter was over,” said Gordon Wallman, who works at Heritage Co-Op where he delivers groceries to the elderly.

“I knew this was coming and I thought, oh, I hope we don’t get 30, 40, 50 centimeters that they’re planning because we couldn’t move.”

The blowing of fresh snow was no problem for Louise Fontaine.

“I love this weather, so it’s actually sort of relaxing and calming for me,” the Winnipeg woman said. “You can’t change it, so I think you just have to accept it.”

Fontaine admits, however, that shoveling could become tiring over the next few days as more and more snow is expected to fall.

Some animals expressed a bit of frustration with the snow, including Parmesan the dog.

But other Manitobans are making the most of it.

Drew Wolitarsky, receiver for the Winnipeg Blue Bombers, took the opportunity to try another sport.

While some Manitobans hunker down and stay indoors, snow removal crews across the province are working hard to keep streets safe.