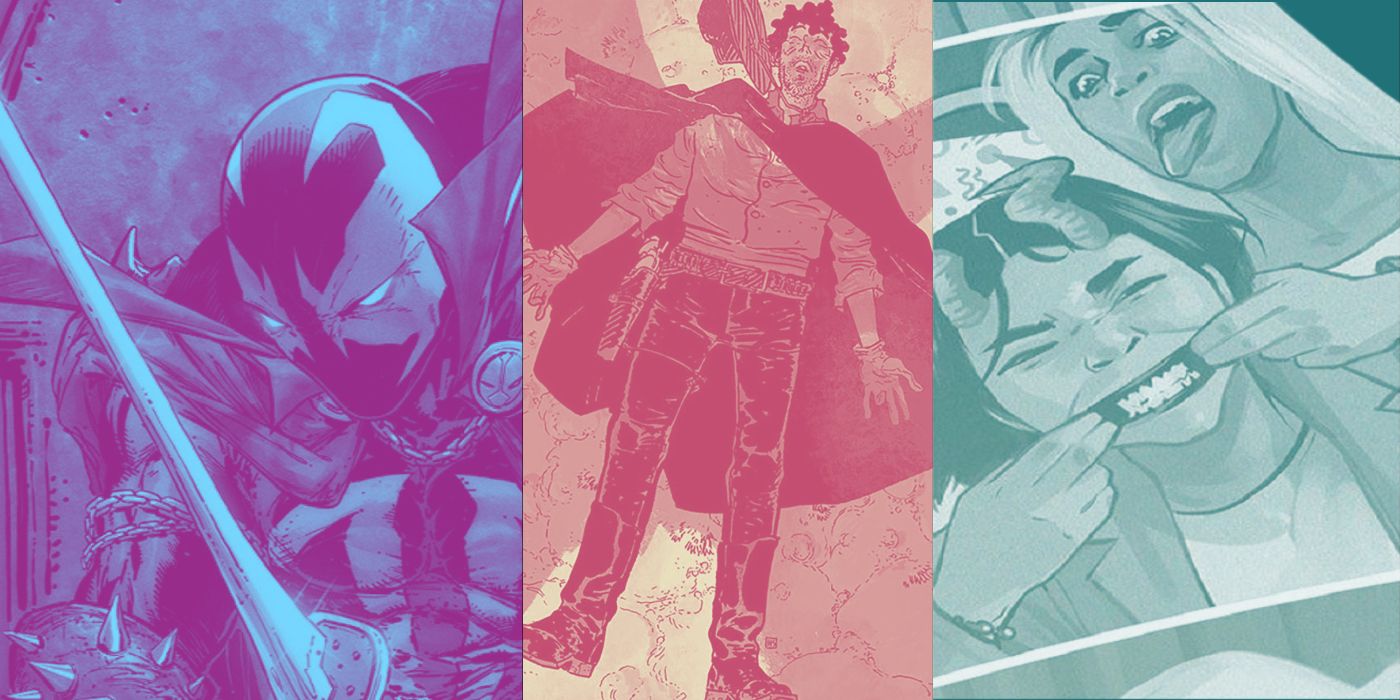 The following contains spoilers for above the snakes #1, King’s Spawn #12, and Saga #60 now on sale at Image Comics.

The death of a spouse freezes time, leaving a shocked survivor to ask, “Is this real? While death seems unfair and unnatural, the murder of a spouse is the cruellest blow of all. No survivor should ever have to experience their partner’s violent fate, yet for the protagonists of three Image Comics, it’s a trauma they’ve experienced firsthand.

Without the love of their partner, the survivors of Above the Serpents, King Spawn, and Saga need to move on and make sense of their drama. Unable to change the past, these characters must find a missing part of themselves, a part of their soul that died with their partner. From revenge to resurrection, Dirt, Spawn and Alana choose to walk a painful path to justice, hoping to redeem the horror of their partners’ deaths.

Above the snakes #1 (by Sean Lewis and Hayden Sherman) presents the tried and true path of revenge as the solution to justifying the murder of a spouse. The main protagonist, Dirt, embarks on a journey to find and slaughter his wife’s killers, the Above Snakes Gang. No matter how hard he tries to forget it, Dirt still remembers the day he discovered his wife’s body draped in black bandanas. From childhood to adulthood, Dorothea, Dirt’s wife, had dreamed of escaping the city and establishing a new life together. Yet the Above Snakes killed Dorothea’s dreams, leaving Dirt to wander the desert in search of black bandanas, thirsting for revenge.

At its core, revenge is about righting the wrongs of injustice. It is an eye-for-an-eye masochism that leaves its captives consumed by violence and hatred. In that vein, Dirt’s pursuit of revenge brings out his worst urges, both as a man and as a killer. He becomes an honorary member of the Blood Runners, a clan of gunslingers fueled by bloodlust and retribution. By the end of the issues, it’s clear that Dirt, like his clan, will leave a trail of corpses even if it costs him his soul. Dorothea’s death was an unjust and brutal act; however, the question remains whether Dirt really wants to destroy his humanity just to balance the scales of injustice.

RELATED: Image Comics’ Haunting Can’t Escape the Pain of His Past Love

Whereas Above the snakes #1 traveled the well-worn path of revenge, King Spawn #12 (by Sean Lewis, Todd McFarlane, Javi Fernandez, Fco Plascencia and Sheila Saldana) proves that resuscitating a murdered lover is an equally dangerous approach. Don’t be fooled, however, because King Spawn #12 is still a violent affair filled with satanic serpents and severed limbs, reminding readers that redemption, like revenge, is a blood-soaked journey. The issue centers around Spawn’s refusal to sit on the divine throne and assume the role of king. Angered by Spawn’s rebellion, Black Azrael, a fallen angel, and his council of priests race to bend Spawn’s will, preying on the last shred of Spawn’s humanity: his dead wife.

King Spawn #12 allows Spawn, aka Al Simmons, to raise his late wife, Wanda Blake, from the dead; however, Al’s potential reunion with Wanda comes with a few chains. First, Al must fully submit to King Spawn’s power to resurrect Wanda. Unfortunately, what empowers King Spaw is siphoning Al Simmon’s humanity. Second, a freshly resurrected Wanda isn’t the same Wanda from Al’s past; instead, she’s a divinely empowered queen, ready to rule alongside her husband, King Spawn. By the end of the issue, Spawn — and readers — wonder if it’s morally acceptable to bring a murdered spouse back to life or leave them alone — for good.

In Saga #60 (by Brian K. Vaughan and Fiona Staples), Alana and Hazel’s grief turned into a tsunami, leaving mother and daughter to clean up the debris of Marko’s death. Like most mothers, Alana struggled to give her daughter a sense of normalcy. Sometimes that means supporting Hazel’s punk rock band, while other times it’s selling intergalactic snake oil side by side in Townsquare. Ultimately, Alana’s grief pushes her to move on, even at the expense of her sanity. Unfortunately, Hazel adopts many coping mechanisms from her mother. Although she still loves her father, Hazel, much like her mother, seems overly optimistic about life; however, below the surface, the reality is that neither mother nor daughter has mourned Marko’s death in three years.

RELATED: How Saga redefines the grimy, traumatic underbelly of sci-fi

Instead of modeling Dirt’s revenge or emulating Spawn’s flirtation with resurrection, Alana chooses the most humane response of all to her husband’s death: she ignores him. After a three-year hiatus, fans of Saga had hoped for some sense of closure after Marko’s shocking death in issue #54. Once of the saga new chapter has begun, readers have been longing to see Alana struggle with her grief or, at the very least, sit down and share her feelings with Hazel. Yes, there are nods to Marko’s legacy, but the impact of his death, particularly on his daughter, remains absent and unseen, much like Marko himself. Yet, as Alana and Hazel soon discover, grieving doesn’t follow a set schedule. Sometimes it drains slowly, and other times it swallows up an entire bereaved family.

In the last moments of Saga #60, Alana and her family experience another death. As the family returns to their forest home, they stop and see their rocket – the same rocket that Marko, Hazel and Alana called home – engulfed in flames. Instantly, Hazel yells at her father, fearing he’s trapped in the fire, but Alana quickly reminds her that Marko isn’t inside the ship. Hazel, filled with fear and sadness, refuses to accept her father’s death. As flames devour their home, Alana and Hazel sob, mourning Marko’s death for the first time in three years. Grieving has no timetable, but when it comes unexpectedly – and unwelcome – it tears down our defenses, forcing us to face the pain we have long ignored.